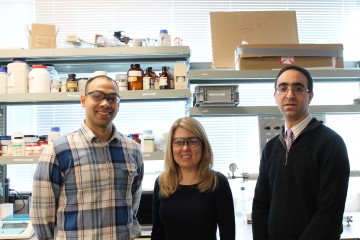 A UBC research team, led by Chemical and Biological Engineering Professor David Wilkinson, received $450,000 from Western Economic Diversification Canada towards the commercialization of technologies that will support sustainability in the oil and gas industries.
The award was made at a ceremony on March 3, 2015 at the Department of Chemical and Biological Engineering, and was attended, among others, by Dr. Helen Burt, Associate Vice President Research & International, UBC and by the Honourable Michelle Rempel, Minister of State for Western Economic Diversification. In her announcement, Ms Rempel stated “Our Government recognizes that Canada’s oil and gas sector is a key part of our economy. This investment promotes the development and commercialization of technologies that will support responsible resource development, as well as create jobs and growth.”
The funding will be used to develop and commercialize equipment to convert by-products of the oil and gas industries into reusable materials, promoting sustainable resource development in Western Canada.
The equipment, which has been developed by UBC at a small scale, creates value from carbon dioxide emissions and wastewater generated by the oil and gas industries, provides an innovative approach to industry challenges, and creates significant economic opportunity.
• Commercialization of this equipment is expected to reduce Alberta’s carbon footprint by over 1 million tonnes per year.
• UBC’s Chemical and Biological Engineering department conducts cutting-edge research in the fields of energy and fuels, natural resources, environment, health, and industry.
• Canada is the world’s fifth largest energy producer.
According to Professor John Hepburn, UBC Vice President Research & International, “this funding connects UBC research with industry. Our researchers are developing innovative technologies to reduce carbon dioxide emissions and wastewater from the oil and gas sector.”
The UBC research team led by Professor David Wilkinson includes team members Dr. Arman Bonakdarpour, Dr. Alfred Lam and PhD Candidate Saad Dara.
The team previously received $500,000 in funding from the Climate Change and Emissions Management Corporation (CCEMC) to further the new technology towards commercialization. The project was one of 20 finalists chosen from over 344 international submissions in 2014. For more CCEMC funding details, visit the Chemical and Biological news release.