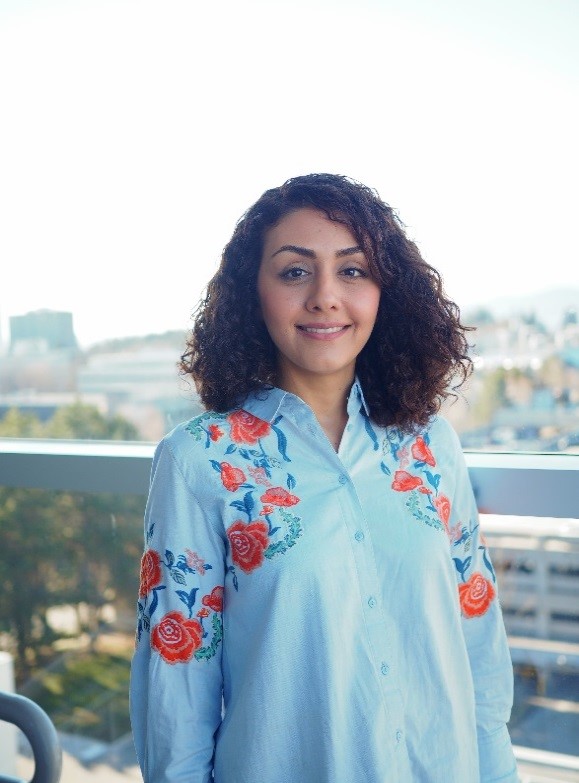 Parisa Chegounian is a doctoral student supervised by Dr. Vikram Yadav and she is an Alexander Graham Bell Scholarship recipient.

Alberta’s oil sands surface mining operations generate nearly a trillion liters of oil sands process-affected water currently contained in tailings ponds under the zero-discharge policy. Parisa’s research focuses on development of a treatment platform that aligns with regulations and meets oil sands developer’s requirements for a sustainable treatment technology  with minimal environmental and social impacts. She is developing a bioremediation technology that increases the degradation rate of toxins by directed evolution of naturally occurring bacteria in oil sands tailings ponds.
Parisa’s project and its scope of work were originally defined by Metabolik Technologies, a biotechnology start-up company in Vancouver. Her research, generously supported by NSERC through the Alexander Graham Bell Scholarship, is now at the core of the company’s R&D portfolio and she is also living her dream of being an ecopreneur as a part of the company.

Parisa’s professional network now includes regulators, engineers and scientists in oil sand companies, large biotechnology companies, policy makers, and indigenous communities. They view tailings ponds as an opportunity rather than a problem; rehabilitating ponds can save water, other valuable resources, and create green jobs. All involved share a commitment to the environment, society, and economy 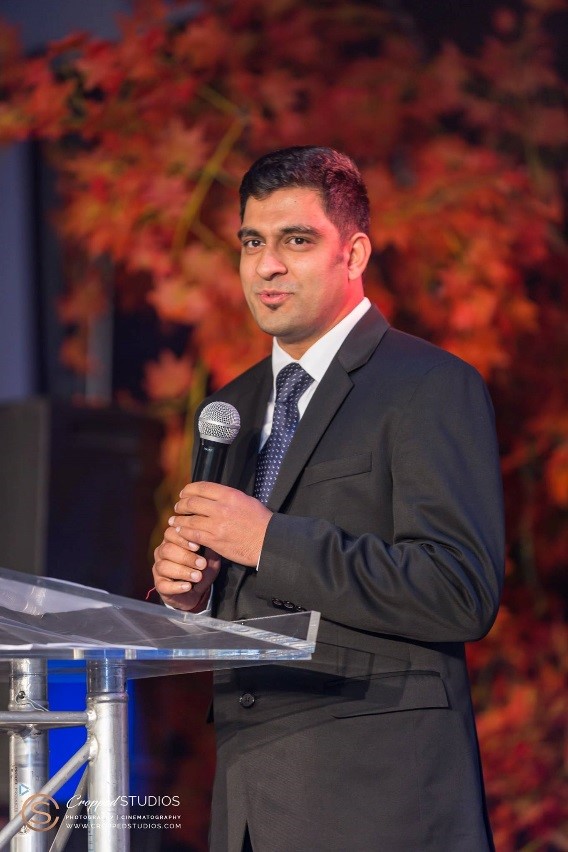 Fuhar Dixit is a Vanier Scholar at UBC investigating practical solutions to address the global challenge of drinking water scarcity. His supervisor is Dr. Madjid Mohseni, Driector of RES’EAU WaterNet. In particular, Fuhar’s research focuses on the application of low-cost treatment technologies for the removal of physical, chemical, and microbial contaminants from municipal waste-water to ultimately improve the efficacy of its reuse.

Fuhar has been an active member of the ‘IC-IMPACTS Student Engagement Committee (SEC)’ since its inception in 2015 and served as Chair between 2015-2017. In this role, he acted as liaison between the staff and the student researchers engaged in IC-IMPACTS research projects (HQPs). Fuhar has also coordinated and implemented many SEC-related activities with HQPs in both Canada and India. Fuhar is also an active playing member of the ‘INDCAN Cricket Club’ and was a member of the UBC Thunderbirds Badminton Team.

Joseph English is a doctoral student under the supervision of Dr. David Wilkinson, Professor in the Department of Chemical and Biological Engineering at the University of British Columbia and Canada Research Chair (Tier 1) in Clean Energy and Electrochemical Technologies. Joseph was a Canada Graduate Scholarships – Master’s (CGSM) Program recipient, and is now in the first year of a Killam Doctoral Scholarship and a Four Year Doctoral Fellowship. His research interests include the development of electrochemical technologies as sustainable solutions for clean water. Outside of his academic activities, Joseph enjoys music, cooking, the outdoors, and spending time with his young family. 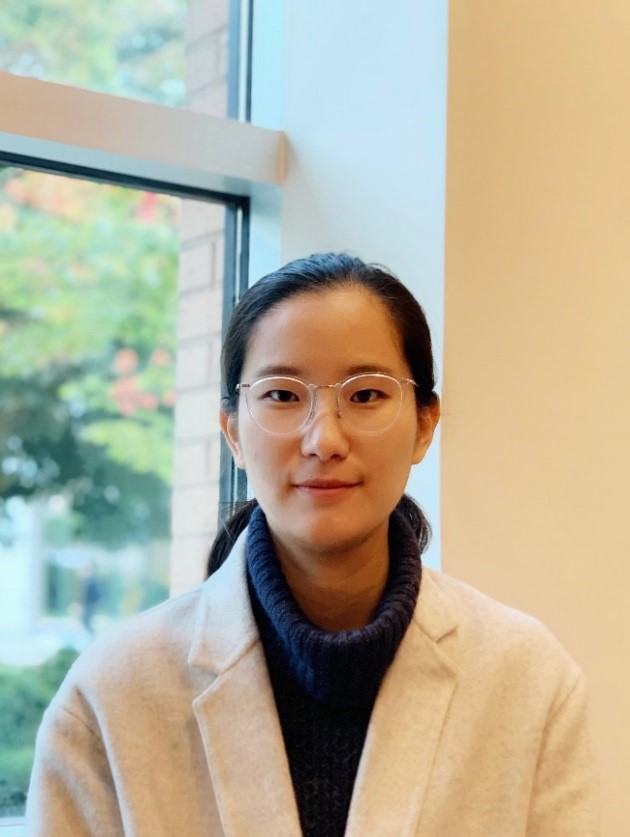 Yu Pei is a doctoral student and a Four Year Doctoral Fellowship recipient in the department of Chemical and Biological Engineering. She began her studies at UBC in July 2018 under the supervision of Prof. Elod Gyenge and Prof. David Wilkinson.

Yu was raised in Beijing and completed a dual degree: a Bachelor of Engineering in Chemical Engineering and Technology and a Bachelor of Economics in Financial Engineering at Sichuan University in 2015. During her undergraduate years, Yu obtained an inventive patent on the design of an aluminum battery with simultaneous hydrogen evolution. Fascinated by cutting edge approaches for renewable energy, Yu found her research interests lay in electrochemistry and energy storage technologies.

After her bachelor’s studies, Yu conducted research on carbonaceous nanomaterials for lithium ion battery technology in Prof. Zhongwei Chen’s group and earned an MASc in Chemical Engineering from the University of Waterloo in 2018. Yu is a recipient of a Mitacs Accelerate Fellowship. Her research focuses on advanced non-precious bifunctional electrocatalysts for oxygen reduction and evolution reactions for regenerative alkaline fuel cell and water splitting technologies. 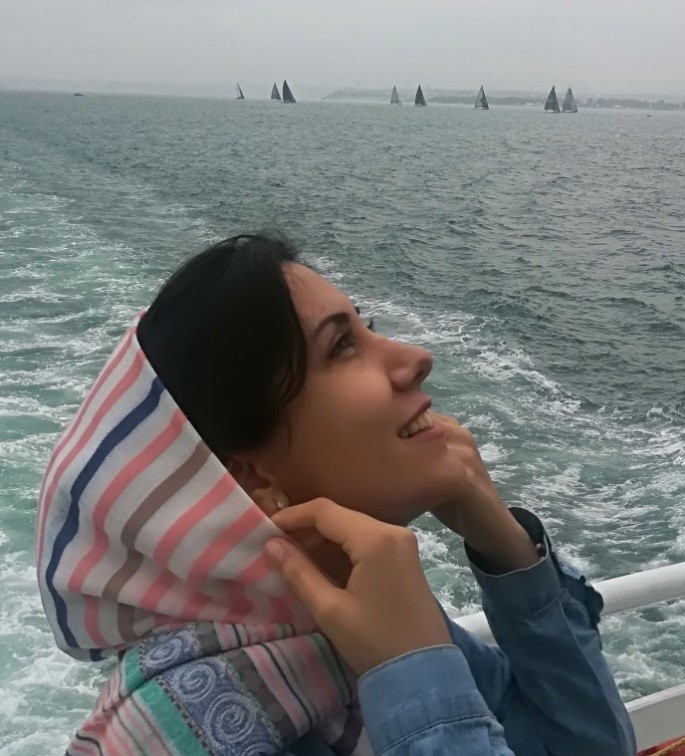 Samira Shirvani received her BSc in Chemical Engineering from Isfahan University of Technology in 2012 and then completed an MSc in Chemical Engineering at the University of Tehran in 2015. After graduation, she found an opportunity to work as a research assistant at Iran Polymer and Petrochemical Institute (IPPI). During her three years of working at IPPI, Samira learnt a lot about catalyst synthesis, catalyst characterization, and catalytic processes. As she was working on different industrial and scientific projects, she was also publishing several peer reviewed journal papers. To learn more in depth knowledge about catalysis, she decided to pursue her academic studies by attending a world-class PhD program at The University of British Columbia, which is one of the best destinations for continuing an academic career– not only because of its worldwide reputation but also because of the brilliant professors working here.
After arriving at UBC in May 2018, Samira was the recipient of the coveted Four Year Fellowship for doctoral students. 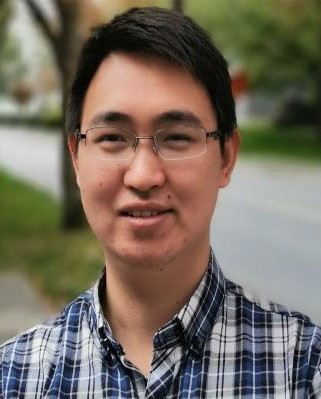 Yixiu Wang is a first-year doctoral student in Chemical and Biological Engineering under the supervision of Professor Bhushan Gopaluni and Assistant Professor Yankai Cao. He received his master’s degree in Vehicle Engineering/Battery Management System from Tongji University in 2019. His major research interests are advanced process control and the design and implementation of large-scale local and global optimization algorithms.

Yixiu’s current research area is development of a lithium-ion battery degradation model to accurately estimate and predict power and capacity loss. He will use the model to formulate optimal charging and discharging strategies to optimize power system operation incorporating battery degradation.
Yixiu is a new recipient of the Four-Year Fellowship for doctoral students. 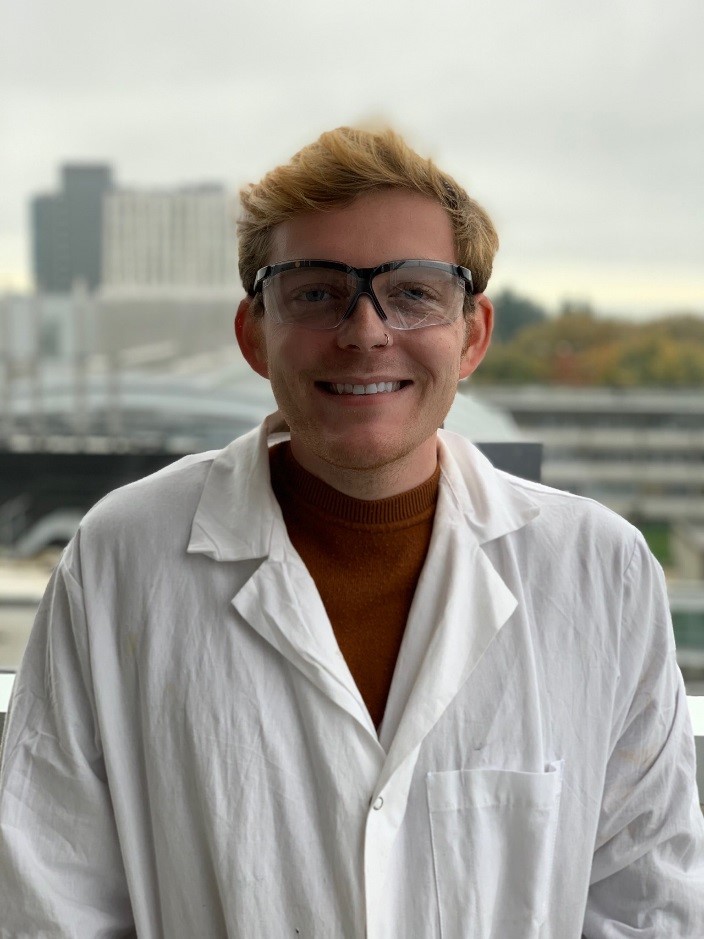 Alec Jameson graduated with an MASc from Queen’s University in June 2018, and began a doctoral program in the Department of Chemical and Biological Engineering at UBC the following September under the supervisor of Dr. Előd Gyenge. His research focuses on electrochemical engineering, electrocatalysis, and energy engineering. Alec’s research goals are to combine aspects of chemistry and chemical engineering to provide cleaner energy for the planet. At present, his research focuses on identifying new durable, cost-effective electrocatalysts to increase the performance of flow batteries for application in largescale
stationary energy storage, and later on for integration into renewable energy sources such as solar and wind. Other research focuses include electrode and membrane separator design for batteries and regenerative fuel cells.

Alec was awarded a Four-Year Fellowship and a Graduate Student Initiative award. He is currently a vice-president of the Electrochemical Society (ECS) of British Columbia Student Chapter. In his free time, Alec enjoys running and being outside, and is always training for the next marathon. In the future, Alec would like to continue working in academia and to start his own research group, targeting issues regarding world energy and climate change. 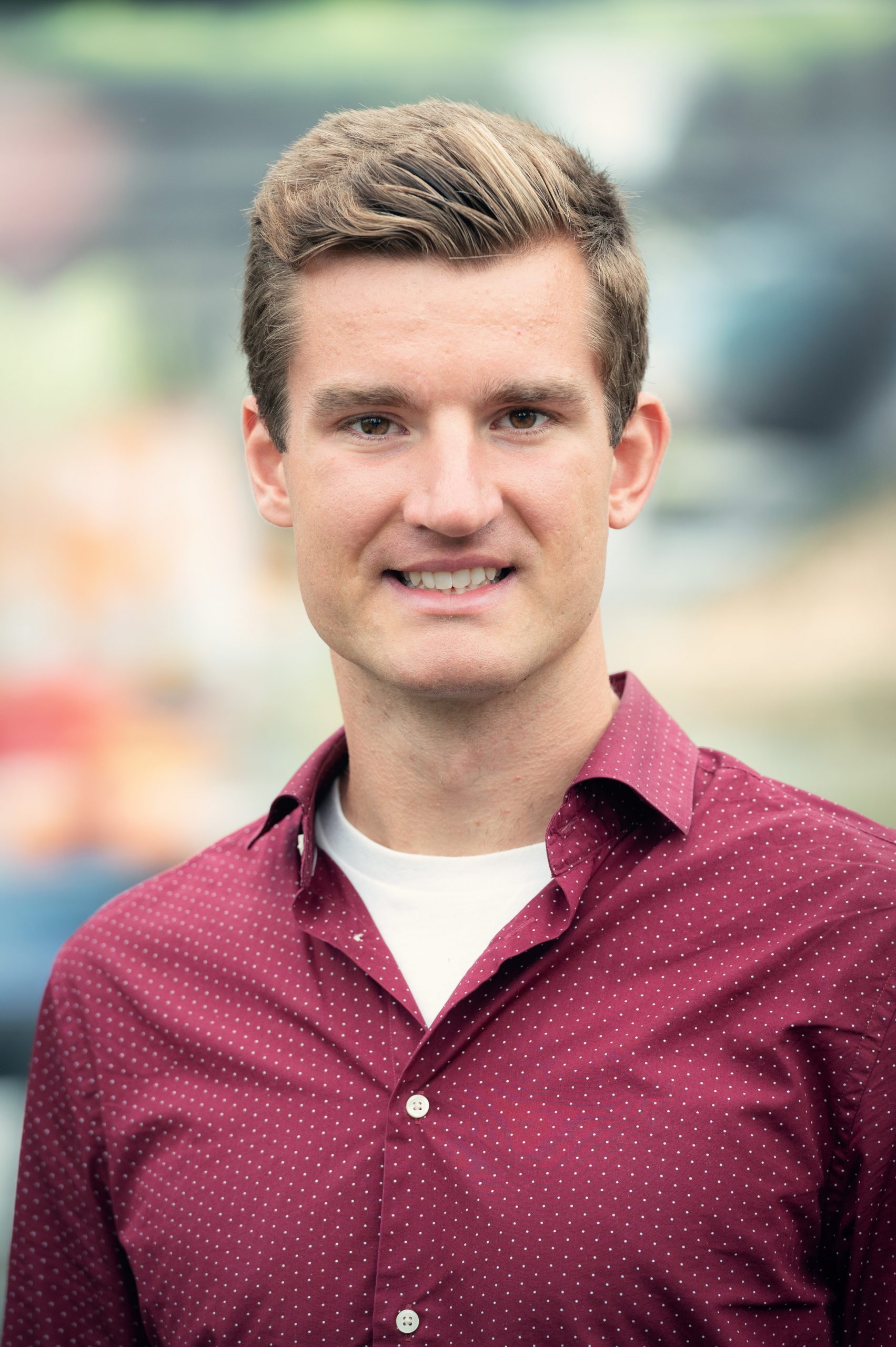 Karl Zimmermann is a PhD candidate in Chemical and Biological Engineering (CHBE) at the University of British Columbia, as well as a 2020 Vanier Scholar, and he loves water!

Karl’s research involves Biological Ion Exchange, a new drinking water filter technology for organics removal, using biology for self-regeneration. This drastically reduces the maintenance and operations requirements, making the filter ideal for small and remote communities. Karl is also a member of RESEAU Centre for Mobilizing Innovation, a nation-wide not-for-profit network of water professionals based out of UBC, creating partnerships to bring clean drinking water to indigenous and non-urban communities. Karl’s involvement in RESEAU includes supporting a project with a First Nations community to implement point-of-entry treatment systems as a pilot for this approach to small-scale water treatment systems.

Karl is involved in the CHBE Graduate Students’ Council, as well as the BC Water and Waste Association – UBC chapter. Through these groups, he strives to promote a sense of community amongst students who often have recently moved to Vancouver for graduate studies. Karl also believes in the strength of diversity – both cultural and academic – and that the best learning and personal growth comes through learning from people with unique backgrounds. For this reason, Karl is a founding member of the UBC Future Waters Student Council, aimed to bring together students in water-related research from all disciplines across UBC, to both build a community as well as create learning opportunities from a wide range of backgrounds.

When not in the laboratory, Karl can be found on the Fraser River, training with the UBC Varsity Rowing Team, or in Squamish, wading into the riverbanks in search of pacific salmon. All in all, Karl is a big water guy!