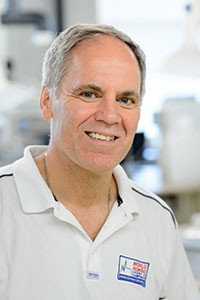 Dr. Wilkinson graduated from the University of British Columbia in 1978, in Chemical Engineering and received his professional engineering status (P.Eng.) two years later. Prior to doing his Ph.D., Dr. Wilkinson worked at Ultra Energy, Inc., (became Ballard Research) as a research engineer investigating primary and secondary Li / SO2 battery technology. From 1977 to 1980 he competed internationally for Canada as a member of the Canadian National Rowing Team. He received his Ph.D. from the University of Ottawa in 1987, in Electrochemistry (Physical Chemistry) where his graduate work was done with the preeminent electrochemist Dr. Brian Conway on proton donor and medium effects in electrochemical proton discharge. Dr. Wilkinson was a Natural Sciences and Engineering Research Council (NSERC) scholar, an Ontario scholar, and an Electrochemical Society Summer Fellow during his Ph.D. term.

After his Ph.D. Dr. Wilkinson joined Moli Energy (now E-One Moli Energy) as the group/section leader in chemistry and electrochemistry and was part of the team that developed the world’s first commercial rechargeable lithium AA battery. In early 1990 Dr. Wilkinson joined Ballard Power Systems and held successive positions of Core Technology Manager, Director, and finally Vice President of Research and Development. During this time he developed a world class Research and Development Department from scratch which achieved world leadership in a number of technical areas. In general, Dr. Wilkinson had key involvement with the research that has helped to make Ballard a world leader in the research, development and application of fuel cell technology and hydrogen technology, and helped to establish Canada as a leading force in this area. Of particular note is that during his time at Ballard, Dr. Wilkinson was the leading all-time global fuel cell inventor up to 2003 by issued US patents. This is outlined in the Gowlings-Lee Report entitled “A Study of Fuel Cell Patenting Activity in Canada”.

In 2003, after leaving Ballard, Dr. Wilkinson became a Principal Research Officer (PRO) and Group Leader for fuel cell technology at the National Research Council Institute for Fuel Cell Innovation (NRC-IFCI) in Vancouver. During this time Dr. Wilkinson played a pivotal role in helping to develop and establish a leading research and development group and laboratory in Polymer Electrolyte Membrane Fuel Cell (PEMFC) technology at NRC-IFCI strongly linked with industry and universities in Canada.

In 2004 Dr. Wilkinson was awarded a Tier 1 Canada Research Chair (CRC) in Clean Energy and Fuel Cells (later changed to Clean Energy and Electrochemical Technologies in 2018) in the Department of Chemical and Biological Engineering at the University of British Columbia. Since 2004 Dr. Wilkinson has graduated over 20 PhD and 14 Master graduate students, 10 post-doctoral fellows, and a number of undergraduates and trainees. From 2004 to 2012 Dr. Wilkinson maintained a joint appointment with the University and the NRC-IFCI where he was a senior advisor and carried out collaborative research with the Institute. In 2009 Dr. Wilkinson was given the Methanex Professorship and appointed to the position of Executive Director of the UBC Clean Energy Research Center (CERC), a new interdisciplinary institute focused on integrated clean energy solutions addressing such global issues as climate change and sustainability. In this position he also implemented the first Masters of Engineering Program at UBC in Clean Energy which was highly successful and has served as a model for other engineering leadership programs, i.e., the MEL (Masters in Engineering Leadership) programs. Dr. Wilkinson was a principal investigator in NanoMat CREATE at UBC, a nanomaterials science and technology graduate training program. He was also a principal investigator in RES’EAU WaterNet at UBC, developing solutions to drinking water, in small, rural and indigenous communities. Dr. Wilkinson has also provided distinguished service to a number of other organizations such as being a Board Member for the Canadian Hydrogen and Fuel Cells Association (CHFCA), a Board Member for the International Academy of Electrochemical Energy Science (IAOEES), and a Program Committee Board Member and Strategic Planning Committee Member for the Pacific Institute for Climate Solutions (PICS).

Dr. Wilkinson’s research is focused on energy conversion and storage, and providing advanced sustainable solutions for energy and water use. For example, he and his group have developed a new treatment process for industrial waste water which couples carbon dioxide mitigation with brine removal to produce useful chemicals. In 2013 this technology was selected as a round one winner (out of 345 proposals worldwide) in an International Grand Challenge on GHG Reduction sponsored by the Alberta Climate Change and Emissions Management Corporation, now called Emissions Reduction Alberta (ERA). In 2016 the technology was advanced sufficiently to be a round two winner ($3 million CDN) and in 2019 was a final Grand Challenge winner of ERA ($5 million CDN). Dr. Wilkinson as a co-founder has now spun the technology out with his students into a new company, Mangrove Water Technologies (www.mangrovewater.com).

Dr. Wilkinson has made significant contributions in the areas of electrochemistry, electro-chemical engineering, battery and fuel cell technology, and has over 80 issued patents and over 225 refereed publications (other publications include 1 co-authored book, 6 edited books and 8 book chapters) covering innovative developments in these fields. He has been recognized by Thomson Reuters as one of the most highly cited global researchers ranking among the top 1% most cited for their subject field indicating exceptional international impact.  He has also been a keynote or plenary speaker at many international conferences, and a member of several university, industrial, government, and journal advisory boards. He is currently Associate Editor for the journal “Electrochemical Energy Reviews” (Springer) and an Editorial Board Member for the journal “Electrocatalysis” (Springer). Dr. Wilkinson has received a number of awards for his innovative work including the R.A. McLachlan Memorial award (the highest professional engineering award in the Province of British Columbia (APEGBC), the R.S. Jane Memorial Award (the highest award for chemical engineering in Canada), the Electrochemical Society Battery Division Technology Award (international) for work related to rechargeable Li batteries and polymer electrolyte membrane fuel cells, the Lifetime Achievement Award of the Canadian Hydrogen and Fuel Cells Association (CHFCA),the Grove Medal (international) for contributions to fuel cells, the National Partners in Research (PIR)Technology Ambassador Award for outstanding career research and outreach, the Brentwood College Lifetime Achievement Award, and the Deans Medal of Distinction and Killam Research Award at UBC. Dr. Wilkinson is a Fellow of the Engineering Institute of Canada, the Canadian Academy of Engineering, the Chemical Institute of Canada, and the Royal Society of Canada.

For more publications, go to my Google Scholar profile

For patents, go to Google Patents